The IWSR, the world’s leading authority on global beverage alcohol data and analysis, has issued a report highlighting that wine and cider add volume while spirits, beer and mixed drinks slow down.

Note: This is a copy of a Press Release issued by the IWSR

Total global alcohol consumption grew slightly in 2017, increasing by 3.5m nine-litre cases versus 2016, according to data just released by the IWSR.

Though 2017’s growth is very modest at 0.01%, it follows a decline of -1.25% in 2016, which is a positive turnaround for the industry as a whole. Wine contributed to the largest gain in global volume, followed by cider. Spirits declined marginally due to losses in the CIS. Beer and mixed drinks consumption continued to decline (see table below).

After a static year in 2016, still wine staged a comeback in 2017, gaining 12m cases (+0.5%). Italy, Russia and the US were the top growth markets for still wine, while the UK and France saw the largest declines. These mature wine markets are losing out to generational shifts in drinks choices; cider and sparkling wine growth in the UK counteracted the decline of still wine, and in France beer consumption rose strongly.

The fastest-growing regions for spirits were Asia-Pacific and the Americas. The continued growth of baijiu in China is the main contributor to the Asia-Pacific volumes, but whisky also performed well in the region, adding 2.7m cases between 2016 and 2017 (+1.2%). Similarly, whisky grew by 2.7m cases in the Americas (+3.2%), and vodka adding 1.7m cases (+1.8%). Agave-based spirits were the best-performing category in the region by percentage growth, growing 5.3%, adding 1.4m cases. The CIS was the only region to see a decline in spirits consumption, falling -7.6% (25.2m cases), due to the decrease of vodka consumption in Russia and Ukraine. Government pressures and generational shifts contribute to these ongoing declines.

Beer returned to growth in the Americas, led by Mexico and Argentina, despite continued declines in the US. Positive results in the Americas along with strong growth in Africa, the Middle East and Europe helped to slow the global decline of beer consumption.

Though cider growth in Europe has slowed, momentum in Africa and the Middle East helped spur a 2.5% global volume increase. The mixed drinks market declined by -1%, led by a slowdown in Asia-Pacific and further category negative trends in the CIS and the Americas.

The IWSR is the leading source of data and analysis on the alcoholic beverage market. The IWSR’s database, essential to the industry, quantifies the global market of wine, spirits, beer, cider and mixed drinks by volume and value in 157 countries, and provides insight into short- and long-term trends, including five-year volume and value forecasts.

The IWSR tracks overall consumption and trends at brand, price segment and category level. Our data is used by the major multinational wine, spirits and beer companies, as well as financial and alcoholic beverage market suppliers. The IWSR’s unique methodology allows us to get closer to what is actually consumed and better understand how markets work. Our analysts travel the world in order to meet over 1,600 local professionals to capture market trends and the ‘why’ behind the numbers. 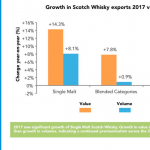 Exports of Single Malt Scotch Whisky increased by over 14% to £1.17bn 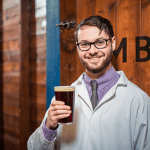 An Inside the Cask chat with…a Timothy Taylor’s Brewer