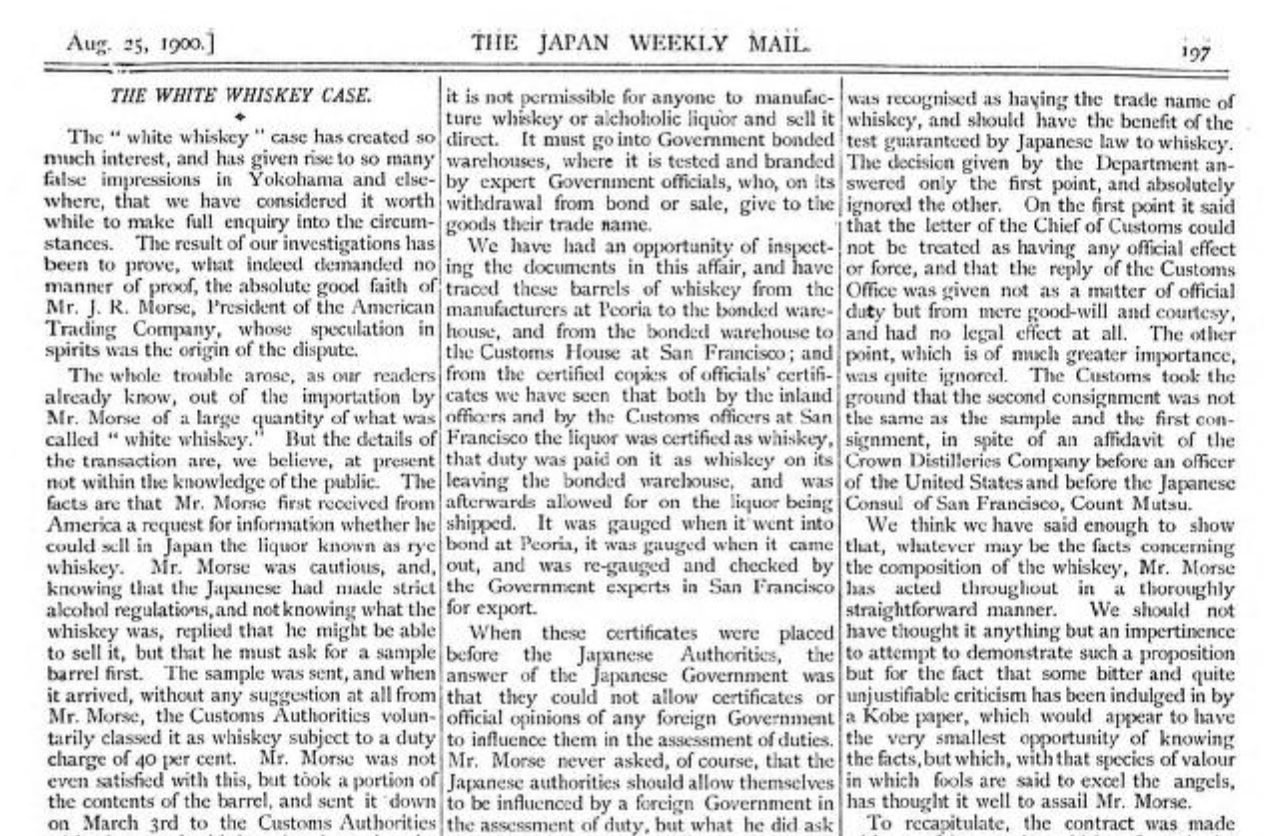 THE WHITE WHISKEY CASE
The “ white whiskey ” case has created so much interest, and has given rise to so many false impressions in Yokohama and else- where, that we have considered it worth while to make full enquiry into the circumstances. The result of our investigations has been to prove, what indeed demanded no manner of proof, the absolute good faith of Mr. J. R. Morse, President of the American Trading Company, whose speculation in spirits was the origin of the dispute.

The whole trouble arose, as our readers already know, out of the importation by Mr. Morse of a large quantity of what was called “white whiskey.” But the details of| the transaction are, we believe, at present not within the knowledge of the public. The facts are that Mr. Morse first received from America a request for information whether he could sell in Japan the liquor known as rye whiskey. Mr. Morse was cautious, and, knowing that the Japanese had made strict alcohol regulations, and not knowing what the whiskey was, replied that he might be able to sell it, but that he must ask for a sample barrel first.

The sample was sent, and when it arrived, without any suggestion at all from Mr. Morse, the Customs Authorities voluntarily classed it as whiskey subject to a duty charge of 40 per cent. Mr. Morse was not even satisfied with this, but took a portion of the contents of the barrel, and sent it down on March 3rd to the Customs Authorities with a letter. In this he pointed out that the spirit was a product which had been passed by them as whiskey and charged at a duty rate of 40 per cent, but that since he was requested to do business in the commodity on a large scale, and was considering the advisability of making a very large contract, he asked that they should test the sample again officially and let him know if he could count on goods of a similar nature being introduced at a 40 per cent rate if he should enter into this contract.

The Customs Authorities answered on the 5th March that they were satisfied that the liquor was whiskey, and that it would be subject to a duty rate of 40 per cent if he made his contract. This letter was officially signed by the Customs Authorities, and duly delivered to Mr. Morse, and on the strength of it he made his contract for 10,000 barrels of whiskey. The first shipment came on the P.M. steamer China on the 27th April, and consisted of 400 barrels, which were immediately passed by the Customs Authorities without argument or discussion, and were charged with a duty rate of 40 percent.

Later on a larger shipment reached Yokohama by a subsequent steamer, and the Customs Authorities then, for the first time, classed the product as alcohol, and assessed the duty at the rate of 250 per cent which they insisted must apply to all subsequent shipments in the same contract.

The suggestion has been made that Mr. Morse was attempting to introduce alcohol at a lower rate by having it branded as whiskey. Now, as a matter of fact, the brands burnt into the barrels were placed there not by Mr. Morse, or by his agents, or even by the shippers or the manufacturers, but by the Excise officers of the U.S. Government, when the liquid was withdrawn from Government bond in Peoria, Illinois, under the requirements of the law, which provides that these officers should test all liquids withdrawn, and shall brand on the casks the trade name properly belonging to them, in order that they may not be sold under any other name.

We may observe parenthetically that, according to the system pursued in America it is not permissible for anyone to manufacture whiskey or alcoholic liquor and sell it direct. It must go into Government bonded warehouses, where it is tested and branded by expert Government officials, who, on its withdrawal from bond or sale, give to the goods their trade name.

We have had an opportunity of inspecting the documents in this affair, and have traced these barrels of whiskey from the manufacturers at Peoria to the bonded warehouse, and from the bonded warehouse to the Customs House at San Francisco; and from the certified copies of officials’ certificates we have seen that both by the inland officers and by the Customs officers at San Francisco the liquor was certified as whiskey, that duty was paid on it as whiskey on its leaving the bonded warehouse, and was afterwards allowed for on the liquor being shipped. It was gauged when it went into bond at Peoria, it was gauged when it came out, and was re-gauged and checked by the Government experts in San Francisco for export.

Japanese law provides that whiskey, gin, brandy, and so forth may be tested, and if they contain less than 65 degrees of pure spirit they shall not be classed as alcohol, but shall go in under the 40 per cent qualification. The official decision of the authorities in this case was that the liquor contained 62% degrees of pure spirit, but they refused to recognise the trade name of whiskey and to give Mr. Morse the benefit of the test guaranteed by Japanese law in the case of whiskey. They classed the liquor as alcohol on its “ appearance and odour,” and in regard to alcohol there is no limit of percentage of pure spirit fixed by law.

Another inference that has been somewhat ungraciously drawn in certain quarters is that Mr. Morse had the idea of introducing the liquor at 40 per cent duty and selling it at a price which would have justified the imposition of 250 per cent. As a matter of fact, a perusal of the contracts which Mr. Morse had entered into relative to this liquor shows that he not only bought the entire contract shipment at a whiskey price, but sold it to Japanese dealers at a whiskey price. So that, even if the liquor were actually alcohol and therefore would yield a large profit if introduced into the country as whiskey, Mr. Morse would not reap any of the benefit of it, and cannot be charged with any lack of business integrity in making the contract, which was concluded on his part with one of the largest and soundest concerns in the United States.

In the Appeal to the Department of Finance two points were made by the importer : one was the letter written to the Chief of Customs at Yokohama before the contract was made, and the other was the fact that the stuff was recognised as having the trade name of whiskey, and should have the benefit of the test guaranteed by Japanese law to whiskey.

The decision given by the Department answered only the first point, and absolutely ignored the other. On the first point it said that the letter of the Chief of Customs could not be treated as having any official effect or force, and that the reply of the Customs Office was given not as a matter of official duty but from mere goodwill and courtesy, and had no legal effect at all.

The other point, which is of much greater importance, was quite ignored. The Customs took the ground that the second consignment was not the same as the sample and the first consignment, in spite of an affidavit of the Crown Distilleries Company before an officer of the United States and before the Japanese Consul of San Francisco, Count Mutsu.

We think we have said enough to show that, whatever may be the facts concerning the composition of the whiskey, Mr. Morse has acted throughout in ‘a thoroughly straightforward manner. We should not have thought it anything but an impertinence to attempt to demonstrate such a proposition but for the fact that some bitter and quite unjustifiable criticism has been indulged in by a Kobe paper, which would appear to have the very smallest opportunity of knowing the facts, but which, with that species of valour in which fools are said to excel the angels, has thought it well to assail Mr. Morse.

To recapitulate, the contract was made with one of the soundest whiskey firms in the United States; Mr. Morse took the greatest possible care to ascertain whether the liquor could possibly be interpreted as coming under the heading of alcohol before he set about its import; it was examined by responsible United States officials and passed as whiskey; the brands of those officials were placed upon the barrels; the whiskey was bought at a whiskey price and was contracted to be sold at a whiskey price ; and, lastly, it contained several degrees less pure spirit than the maximum allowance in the case of whiskey.

Those facts seem to us sufficient to convince any but the incurably stupid or wilfully malicious that, whether the Customs officials be right or wrong in their exclusion of the liquor, there was not the least intention on Mr. Morse’s part to do anything not in perfect accord with a business record of spotless honour. It is a pity that a paper which must necessarily get its information at second- hand should be so reckless in its conclusions as the Kobe Chronicle has shown itself in this matter. 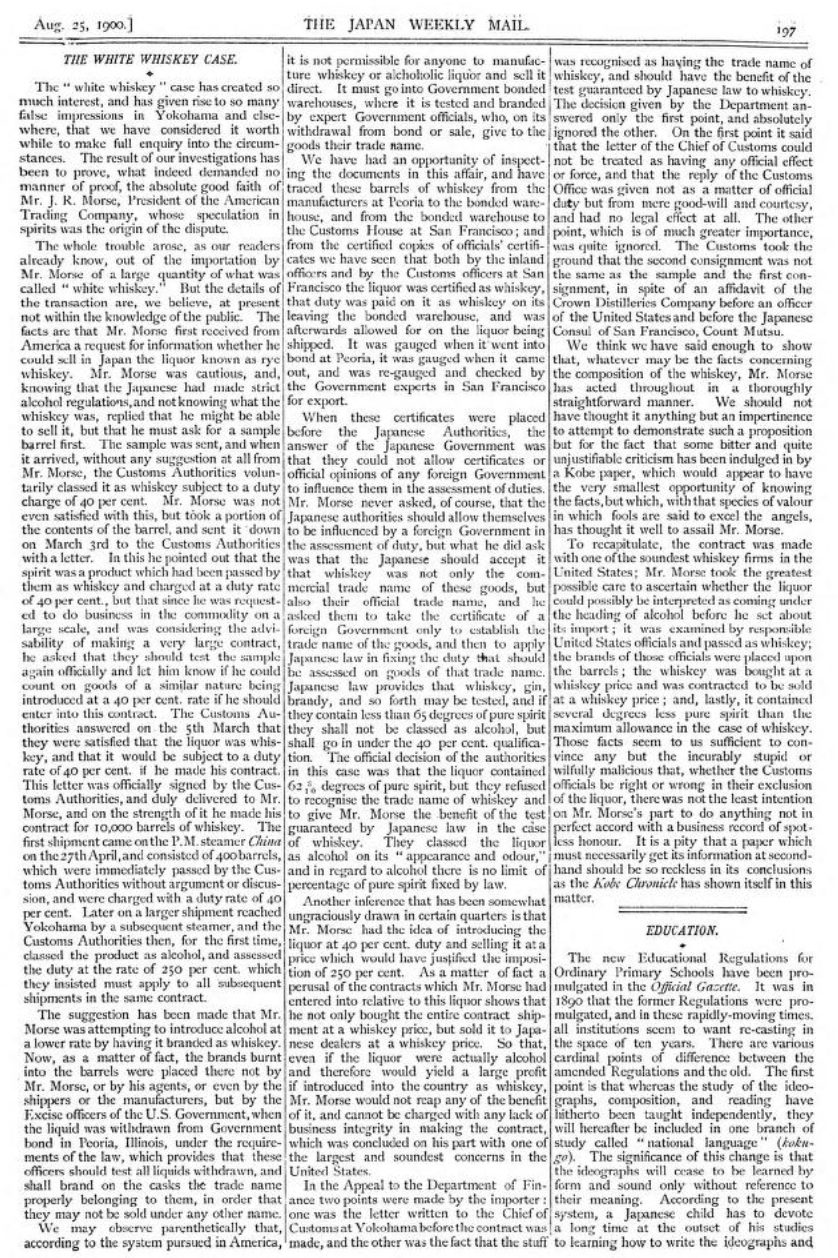 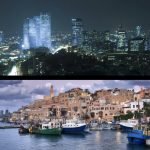 The Opportunity for New World Whiskies in Travel Retail 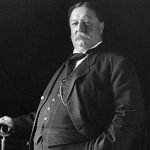 The curious case of Judge Taft, US Whiskey and Japan in 1869