The curious case of Judge Taft, US Whiskey and Japan in 1869

Back in June 2022, I was approached for help by Jason Alexander from the Hamilton County Clerk of Courts in Ohio for information about an alleged case that the Japanese government raised in the US against false advertising by some whisky wholesaler from Cincinnati Ohio in 1869.

Was Judge Alphonso Taft the first ruling on US whiskey’s quality and product identity or is this a historical inaccuracy, given the family link to his son President William Taft and his legal definition on what is whiskey through the Taft decision of 1909?

The story goes that Japan won the case and this in turn had an impact later on influencing bourbon regulations in the US. The case was supposedly handled by judge Alphonso Taft.

This was thought to be the world’s first case on whiskey standards, which resulted in a ruling for the plaintiff finding that the whiskey in this case was not “pure whiskey”.

Their search for information lasted approximately six weeks in 2022 during which, 151 parties were contacted in an attempt to gain any additional information regarding this alleged case. This list of parties included various US domestic and foreign governmental agencies, whiskey and beverage trade associations, whiskey distilleries, whiskey writers and historians, travel websites connected to the country of Japan, the three authors that make mention of the alleged 1869 case in the now defunct “Superior Court of Cincinnati”, and even former Ohio Governor Robert Taft. Governor Taft is the great-great grandson of the late Judge Alphonso Taft who presided over the alleged case.

The potential premise for this case seemed to center around Japanese citizens consuming large amounts of whiskey and spirits from the United States. After a number of years of consumption of this product, many Japanese citizens were sickened, sometimes so much so that it proved to be fatal. One of the many things learned in this search is that at the time, it was a very common practice for United States whiskey producers to adulterate the so-called straight whiskey. Often times, this implied that it was just a diluted product, it literally was simply “watered” down. Other times, it was far more malicious in that toxic additives were sometimes added to the product.

After many years of this, the Japanese government grew tired of this happening to its citizens. The then government of Japan tasked Japanese chemists with determining what ingredients were contained in the latest batch of whiskey received. The information given to this office goes on to allege that this latest batch that was analysed contained noxious additives and was determined to have been shipped from a whiskey wholesaler located in Cincinnati. Assuming that this was the case, logic dictated that the possible plaintiff in the case could have been the country of Japan.

This alleged case has been mentioned in different publications over the years by three authors, such as in the examples below:

Throughout the course of this investigation, the research team did find reference to an interesting event in 1900 that had a connection to whiskey and Japan. As reported in the August 25, 1900 edition of “The Japan Weekly Mail:” it was an incident known as “The White Whiskey Case.”

As indicated in the cited publication, an American importer attempted to import a highly-rectified whiskey to Japan, known as “White Whiskey.” The first instalment, which was the smaller portion of the shipment was treated as whiskey and assessed a 40% tariff. Later on, a larger shipment was sent to Yokohama, Japan and this shipment was classified as alcohol and assessed a tariff of 250%. A dispute arose as to the increased amount of the latter tariff and reached the desk of the Secretary of State. This was considered a very high-profile incident in 1900.

Still not finding any definitive reference to a judicial decision regarding any whiskey case by Judge Taft from the Superior Court bench, something else of interest was uncovered. In 1876, Alphonso Taft serving in his official capacity as United States Attorney General, issued an “Opinion” regarding whiskey or alcohol in response from a request of the then Commissioner of the Internal Revenue Service.

While there was very little about the alleged case from 1869 to be found online as stated previously, the results did allude to something else.

In what has been coined the “Taft Decision” issued in 1909, it would be none other than, Alphonso Taft’s son, President William Howard Taft, in his official capacity as President, who defined by executive order the legal definition of what is “whiskey.”

Prior to the Taft Decision of 1909, the term whisky was rather broad. Whisky included whisky that was aged in wood, rectified, re-distilled or from neutral spirits.

The executive order was the culmination of months of committee hearings with testimony taken from members of the government’s Pure Food Department and various distillers. One of the parties that helped the search for information on the case is Carol Ottolenghi, Director of Research and Library Services for the Office of the Ohio Attorney General. She pointed out what is possibly the most striking and jarring revelation uncovered throughout the whole course of this investigation.

If Alphonso Taft’s ruling was in fact the “first legal case for defining bona fide whiskey in any Court” as it has been conveyed, it would stand to reason that his son President William Howard Taft would have mentioned or cited it in his 1909 executive order. However, no mention is made on the 1909 executive order.

Additionally, a clipping was unearthed from a Louisville newspaper in the Taylor-Hay archive that reported on the testimony that informed President Taft’s 1909 whiskey decision.

One paragraph describes the 1900 Japanese case, and the following paragraph describes Attorney General Taft’s 1876 opinion. It is conceivable that this clipping, or other reporting of that time, were simply misinterpreted to conflate Taft’s opinion as applying to the Japanese case. Based on all of the research, when President Taft issued his 1909 decision, both Attorney General Alphonso Taft’s 1876 opinion and “The White Whiskey Case” were still fresh in peoples’ minds. 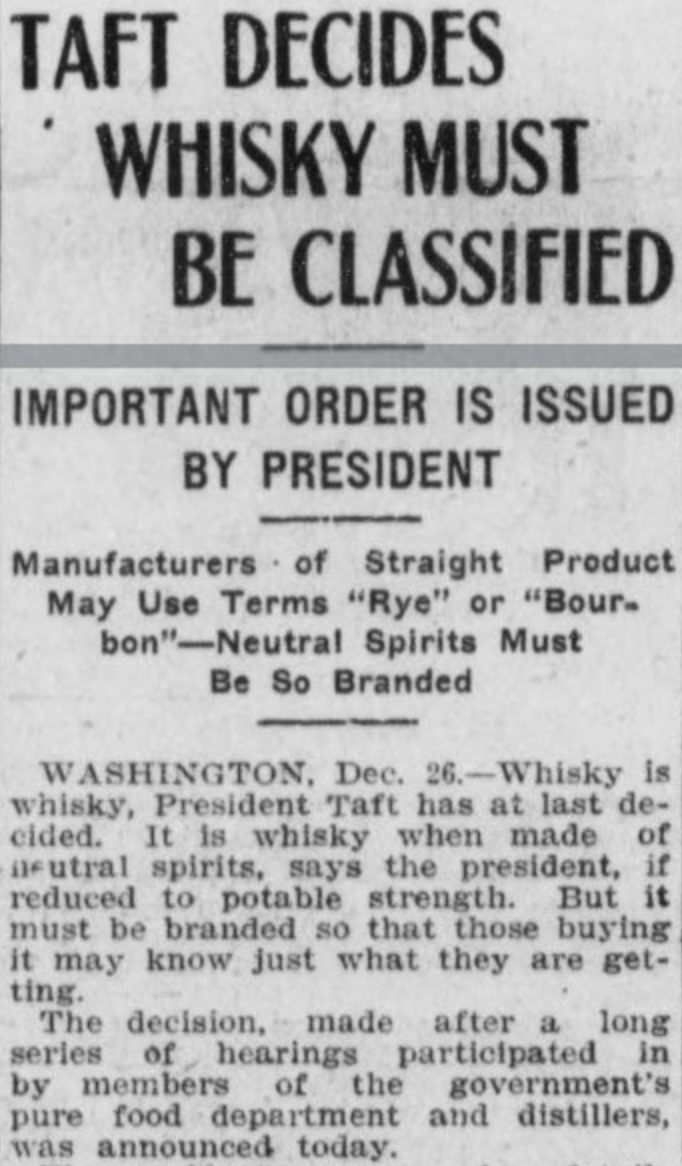 For reference: What is Whiskey? The Taft decision of 1909 (Distillery Trail)

If this case in fact existed and it occurred in 1869, as it has been portrayed, then it’s possible that it was among the many records that were destroyed by the riots and fire of 1884. This possibility still leaves behind the most vexing question: If the records were destroyed but the case did exist, why can’t a single piece of empirical evidence be found?

The conclusion by the Hamilton County Clerk of Courts is that it is their firm belief in almost unequivocal terms, that there is a high probability of this case never having existed. 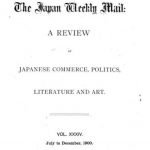 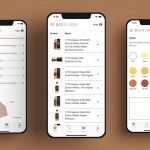