Having fun on World Whisky Day

After lockdown restrictions due to the pandemic, this year we decided to celebrate World Whisky Day by getting together and visiting some of our local distilleries in Glasgow, before moving on to the Bon Accord for the evening. 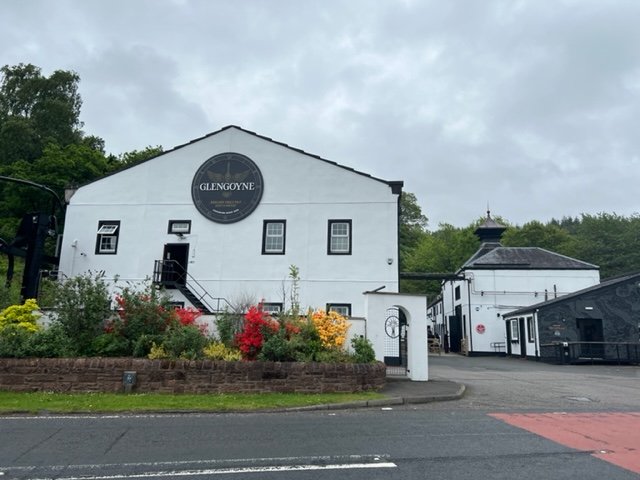 Glasgow and its surrounding area has a number of distilleries which are easily accessible. Our choices for World Whisky Day were Glengoyne Distillery, a long established distillery producing Scotch whisky legally since 1833, and the more recent addition of The Clydeside Distillery, established in 2017 by the river Clyde. 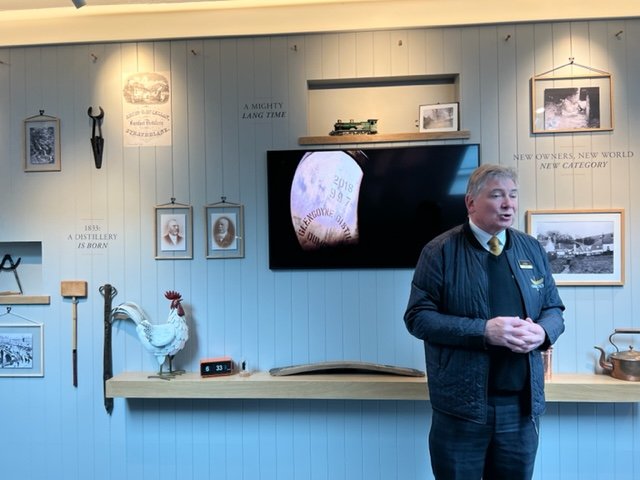 We were welcomed by Gordon at the home of Scotland’s slowest stills on a Saturday early afternoon for our Glengoyne’s The Collection tour and tasting. This package included a full distillery tour followed by a tutored tasting of three whiskies from the Glengoyne range. Glengoyne has always been a popular visitor attraction and although official numbers are not always available, the distillery is said to receive around 90,000 visitors a year, which would probably mean it is one of the Top 5 most visited Scottish whisky distilleries. 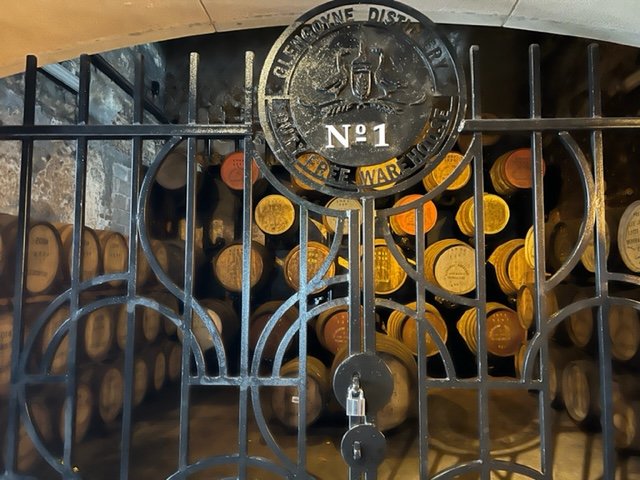 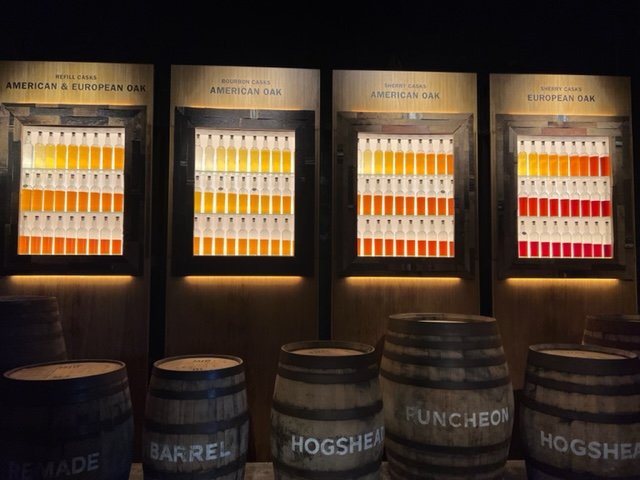 The distillery tour was educational and interesting in equal measure. Unusually, the distillery has one wash still and two spirit stills. Also it is a Highland distillery as it technically distills within the region, but it matures its stocks across the road from the distillery within the Lowland region. As for the distillery name, the Lang Brothers bought the distillery in 1876 and changed the name from Burnfoot to Glenguin, before changing to Glengoyne in 1905. Glengoyne means Glen of the wild geese (in Gaelic).

Whisky broker Peter Russel bought Ian Macleod Distillers in 1963 and over the next 40 years, the Russel family has built a stable as well as this successful company, as blenders and bottlers. They bought Glengoyne Distillery in 2003 from Edrington and repeated the feat by acquiring Tamdhu in 2011 and in 2016, Spencerfield Spirits and their flagship brand Edinburgh Gin. 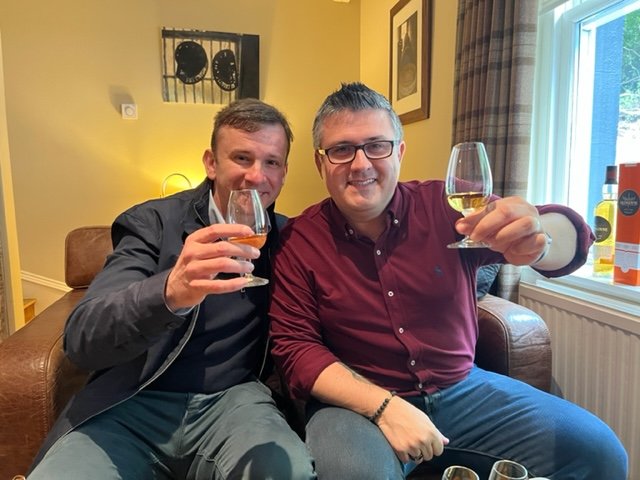 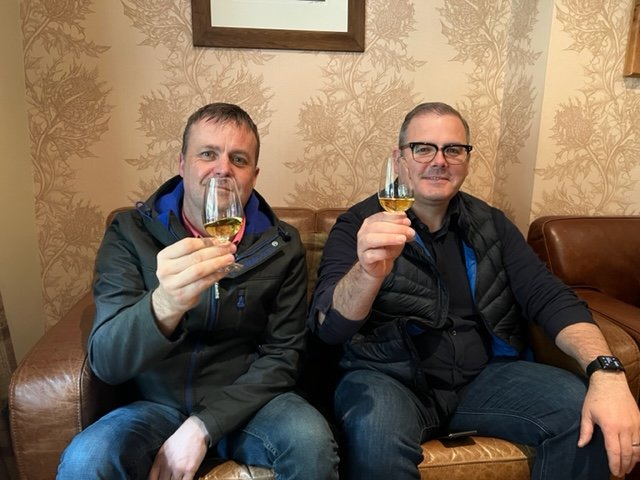 The tutored tasting matched Glengoyne’s Single Malt Whiskies (10yo, 18yo and a 21yo) with the ‘Best truffle in the World’ from Iain Burnett, The Highland Chocolatier. My personal favourite from those sampled was the Glengoyne 18yo, and afterwards a few bottles were purchased at the distillery shop before we made our way to our next stop. 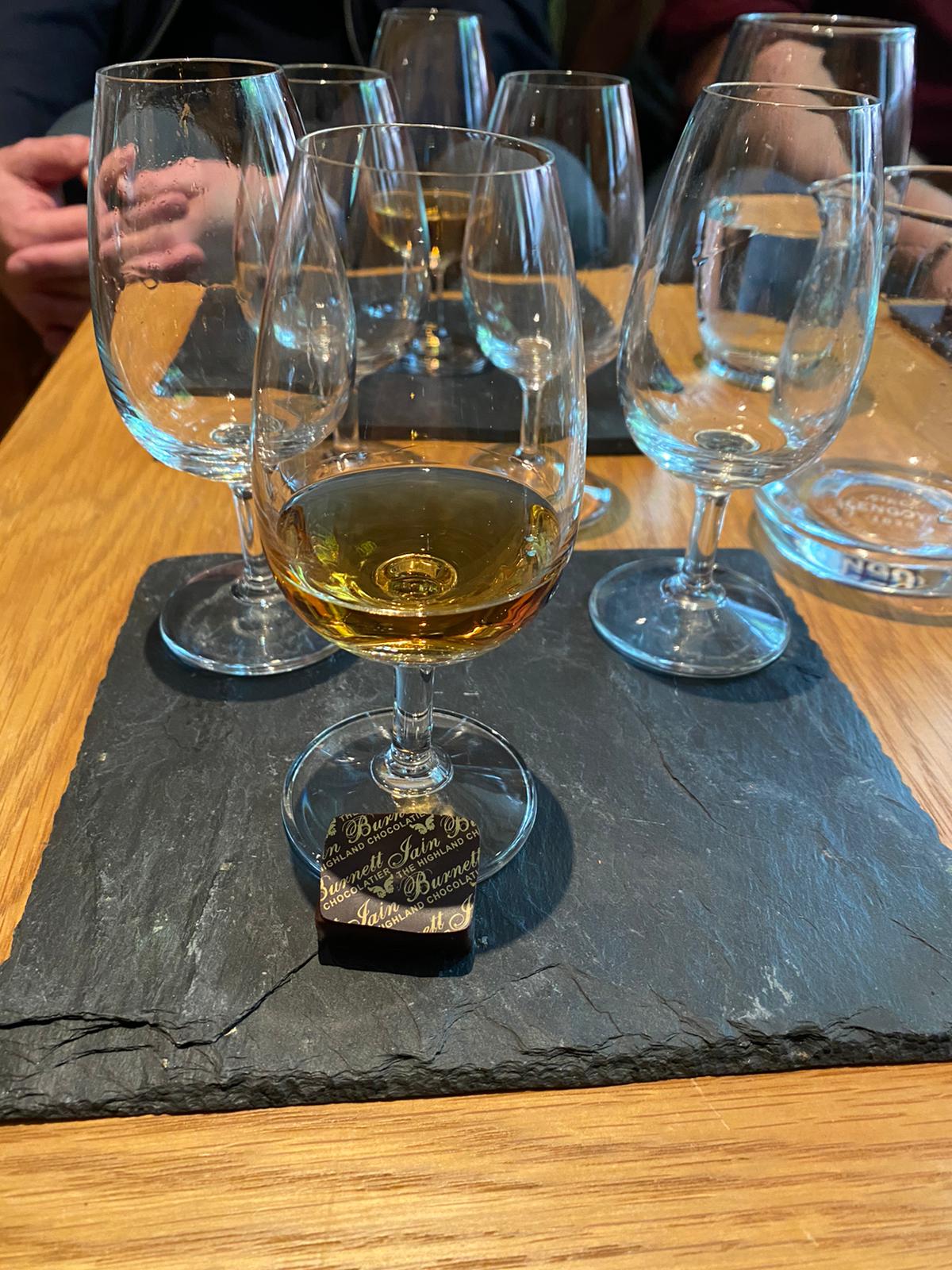 The second distillery visit on World Whisky Day was The Clydeside Distillery. This Lowland whisky distillery is based in an area of Glasgow full of whisky history, with ships dropping off barley and coal and departing with barrels of whisky. 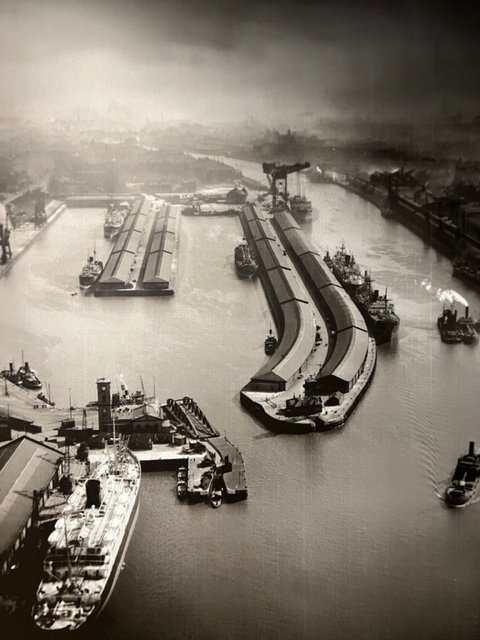 Morrison Glasgow Distillers’ Tim Morrison represents the 4th generation of one of Scotland’s best known whisky families and he took over independent bottler AD Rattray. His grandfather designed the pumphouse which was used to power the hydraulic gates allowing ships in and out of the Queens Dock and which is now the site of The Clydeside Distillery. 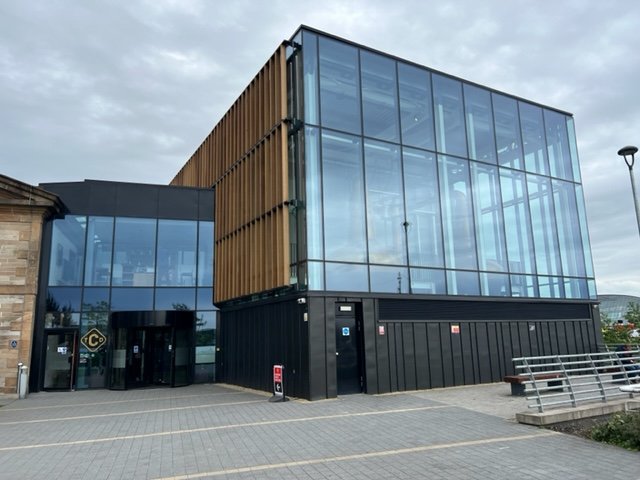 The distillery tour with Alex started with a short film followed by an audio-visual room with information on the people behind the company, as well as the history of whisky making in the city of Glasgow. Then a short education on the whisky production process ahead of seeing it first hand on site. 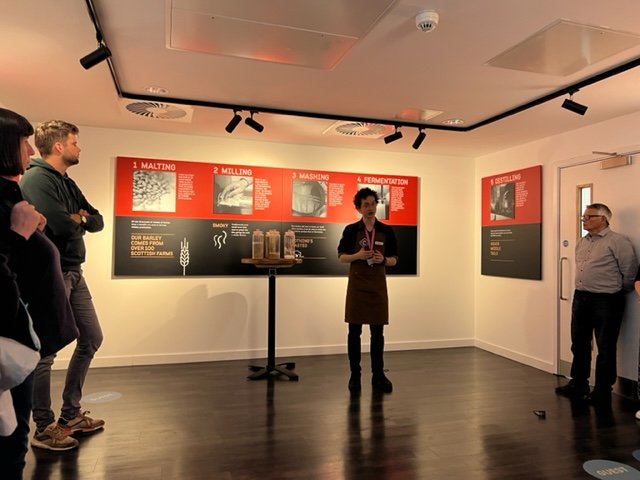 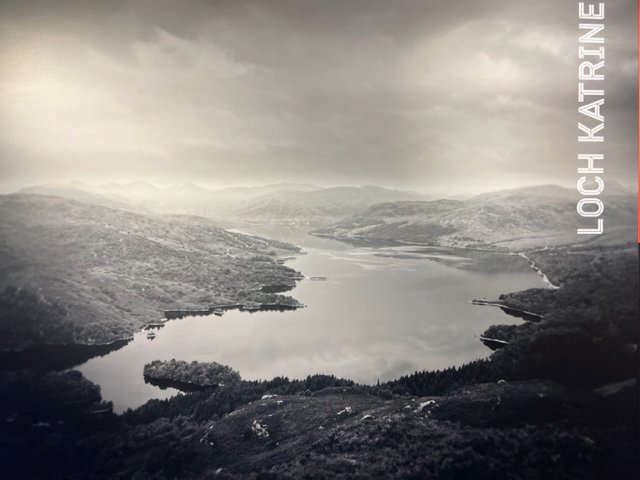 The distillery has a traditional set up with one wash still (7,500 litres) and one spirit still (5,000 litres). The foreshots are 15min with a slow distillation and the cutpoints for the spirit run are 76%-71%. Their annual production capacity is around 500,000 litres of alcohol.

The views within the still room of The Clydeside Distillery with the river Clyde behind it are fantastic and this preceded our tutored tasting with our host. 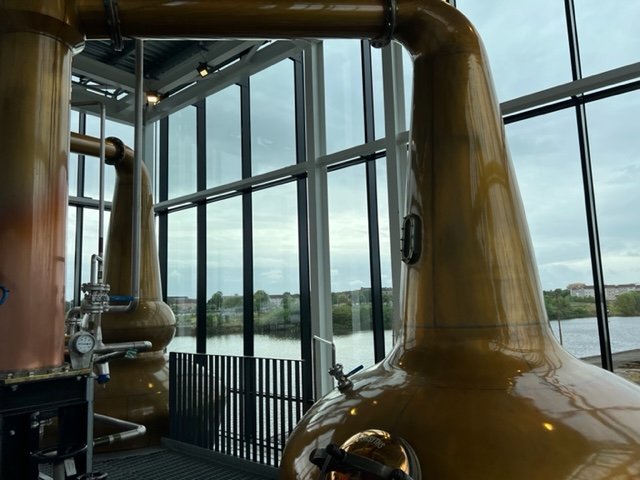 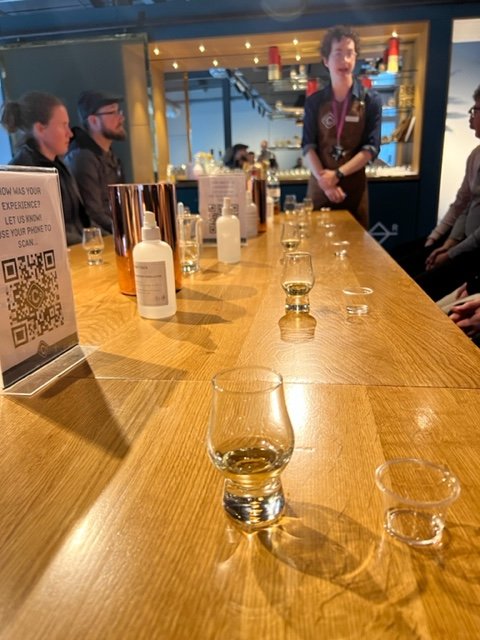 As expected, given that the distillery has only been operational since 2017, the scotch whiskies being sampled were young but this provided a nice opportunity to contrast it against our earlier tasting (and the impact of maturation on whisky). Plus we got to keep our glass as part of the tour. 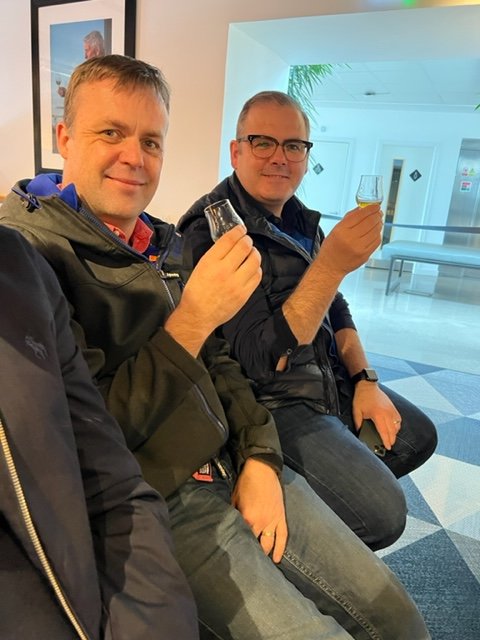 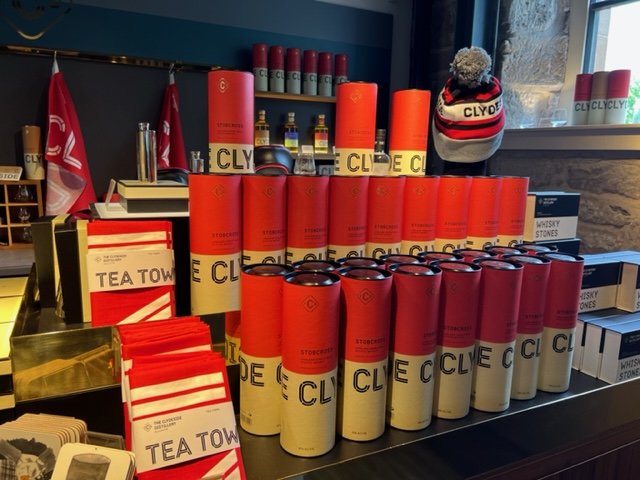 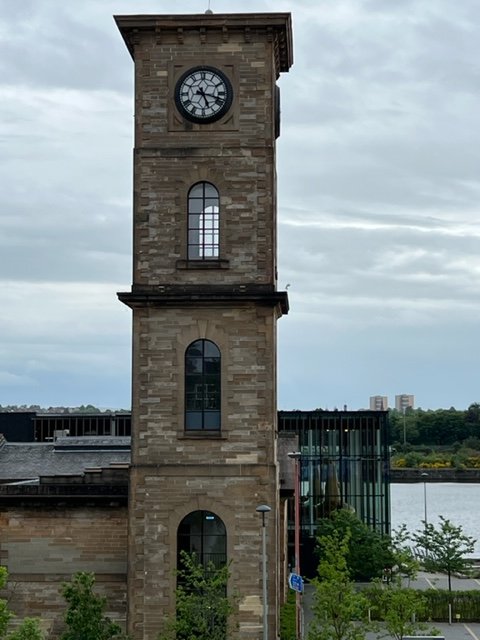 After departing our second whisky distillery, we walked towards Glasgow’s city centre and decided to enjoy a few drams at the renowned Bon Accord malt whisky bar to finish off celebrating World Whisky Day! 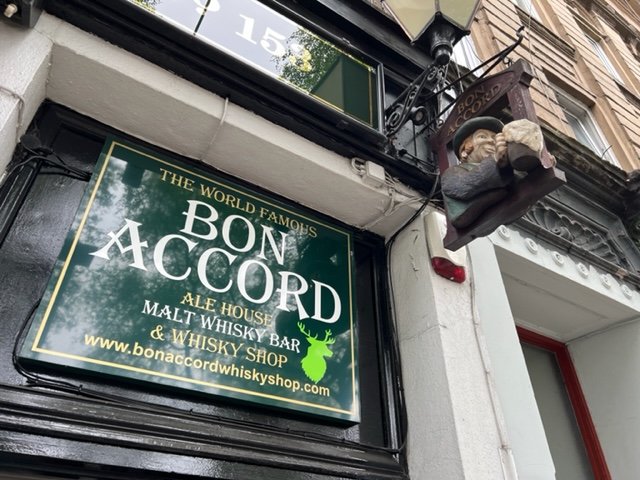 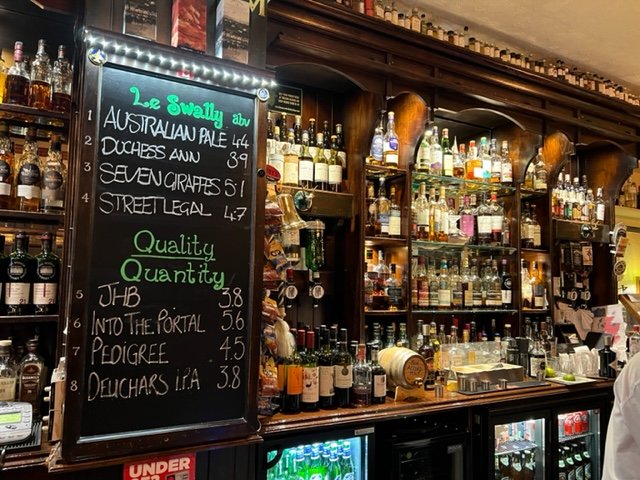 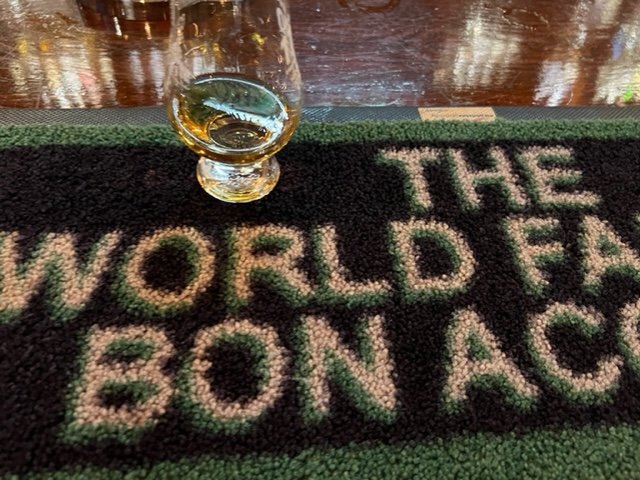 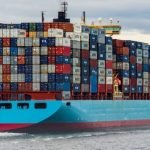 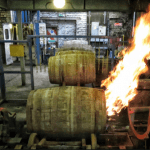