The Past, Present and Future of Welsh Whisky: Penderyn Distillery

I recently took part in a virtual tasting session with Welsh whiskies from Penderyn Distillery. It really brought home how they are honouring the legacy of the first commercial whisky distillery in Wales from the late 1800’s, whilst flying the flag and growing the reputation of Welsh whisky in the present, to finally helping to shape the future also, alongside with some newer Welsh distilleries.

The Welsh Whisky Distillery Company was founded in Frongoch, near Bala, in Merionethshire, North Wales back in 1889. The distillery was not a small craft enterprise and had a “full production capacity anticipated to reach 150,000 gallons per annum”. However, the success of the first official Welsh whisky distillery was unfortunately short-lived and by 1900, The Welsh Whisky Distillery Co. Ltd was put into liquidation, before being wound up in 1903.

The demise of the distillery was influenced no doubt by the strong Temperance movement in Wales. In 2019, Penderyn Distillery also decided to honour the history of whisky-making in Wales with the release of their version of the Royal Welsh Whisky. It is part of Penderyn’s Icon of Wales series and released in March 2019 to celebrate St David’s Day (pictured below). 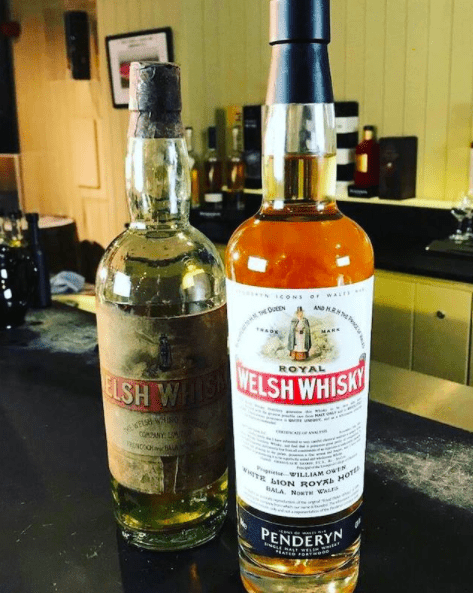 For Reference: Welsh Whisky and the Frongoch Legacy (Inside the Cask)

Interestingly, Wales also has links with the past of the American Whiskey Industry through Evan Williams bourbon, bottled by Heaven Hill Brands. Evan Williams, the first commercial distiller in Kentucky, established his distillery in Louisville back in 1783. 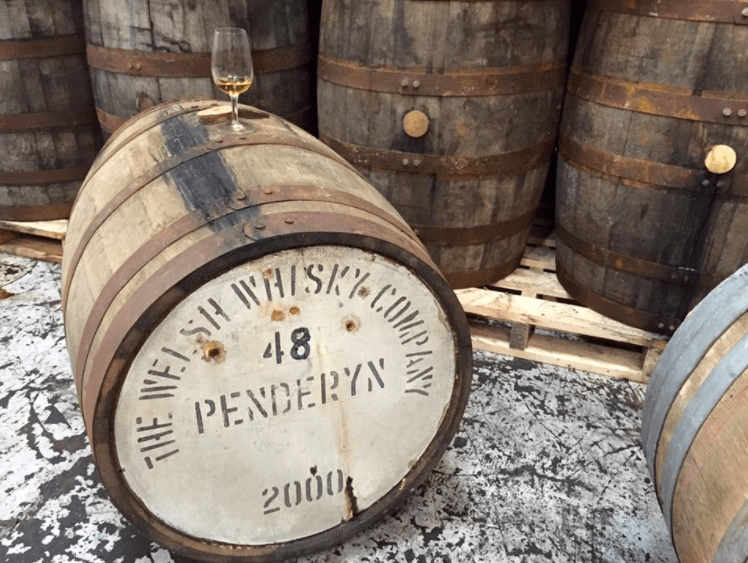 In the modern era, Penderyn Distillery has emerged as the true successor of Frongoch Distillery, with its first distillation carried out on 14th September 2000. Penderyn Single Malt Whisky was launched by His Royal Highness Prince Charles, The Prince of Wales, on 1st March 2004. 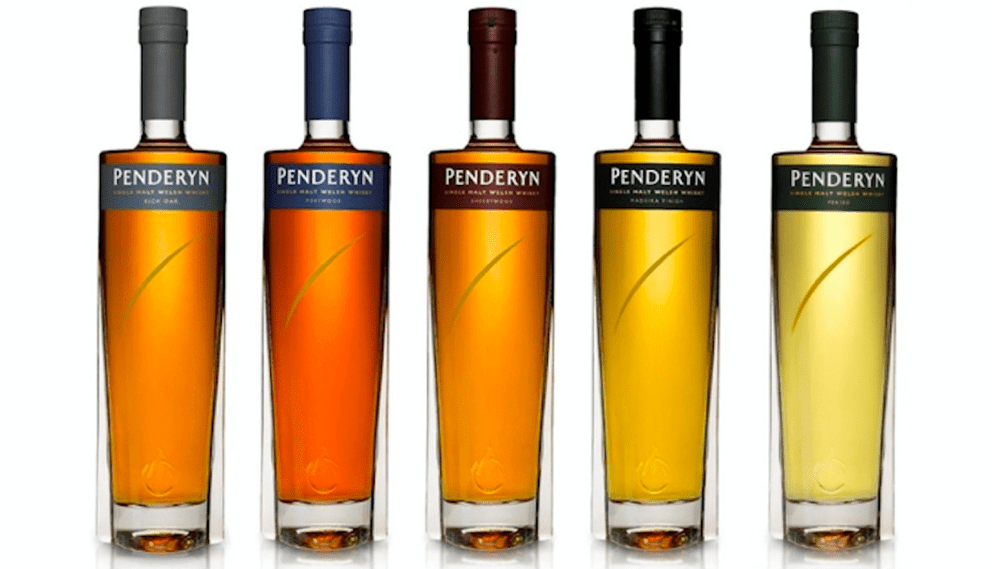 Stephen Davies, Chief Executive at Penderyn Distillery has been reported as saying that support from Scotland was critical in the establishment of his distillery. “We’ve had nothing but help from the Scotch whisky industry”.

A well known independent whisky consultant, having worked with many distilleries around the world such as Kilchoman in Scotland, Milk & Honey in Israel, Kavalan in Taiwan amongst many others, the late Dr. Jim Swan worked initially as a Master Distiller and blender at Penderyn, helping to establish its whisky’s character and house style.

In terms of whisky production, Penderyn was originally made from barley malt supplied by the well-known Cardiff-based brewer SA Brain, specially distilled to produce a mellow, rounded taste that is lighter than most Scotch whiskies, and matures more quickly. However this part of the process was moved in house from 2014. The fermentation at Penderyn takes around 3 days (70-72 hours).

Perhaps more interestingly, much of the reason for Penderyn being light and fruity and easy to enjoy is the type of stills they have used since launch, the Penderyn ‘Faraday’ Still created by Dr. David Faraday.

This modified pot still hybrid, as described by Penderyn, combines a pot still with column distillation. Spirit can be drawn at any point in the column, and Penderyn does so at the 7th plate in the Second Column (diagram below). This new make spirit comes off the still at 92% abv and it is fresh, clean and light. The Faraday Still seems to sit somewhere between a Continuous Coffey Still (used for making grain whisky for example) and a very tall traditional copper pot still (such as those used by Glenmorangie in Scotland).

It takes around 11.5 hours for the whole distillation process to take place using these stills in a batch process and it uses less energy than traditional copper pot stills. A second Faraday still was installed in 2013. The majority of the new make spirit being produced at Penderyn is then matured in ex-bourbon casks from Buffalo Trace Distillery in the USA.

Note that Penderyn Distillery has introduced traditional copper pot stills in 2014 to allow for more flexibility on the style of whiskies being produced, however this is not currently being used in the Gold range tasted during the virtual whisky session. This will also allow Penderyn to experiment and innovate with heavier spirits for the future.

The present of Penderyn Distillery and Welsh whisky was best exemplified by the virtual whisky tasting session. It was hosted by Shona Traynor and led by Mike Wheeler, two of Penderyn’s Brand Ambassadors. There were just under 50 people taking part to learn more about the Welsh distillery through a tasting of its core range (Gold range). The whiskies tasted were non-chill filtered, bottled at 46% abv and naturally coloured. 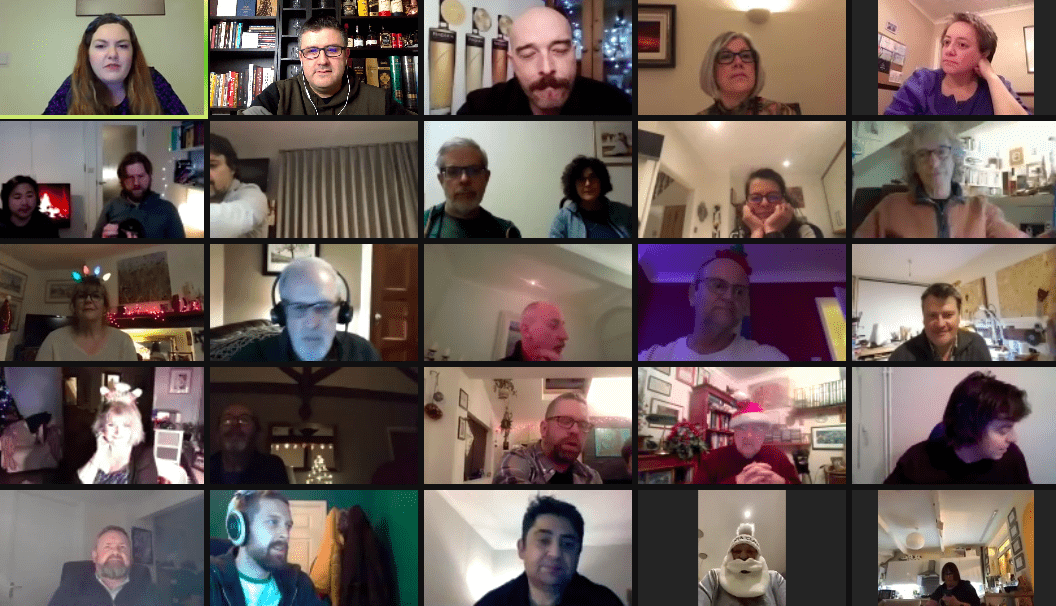 All of the information on Penderyn’s Gold range is available by clicking here – including tasting notes. Why Gold? Because Welsh Gold is apparently extremely rare, pure and precious and was worn by legendary Welsh princes, thus a perfect match for the liquid gold being tasted according to Penderyn.

We started the tasting with the original ‘house style’ of the Penderyn Madeira, aged in ex-bourbon barrels and finished in ex-Madeira wine casks to bring the full character of the Gold range. 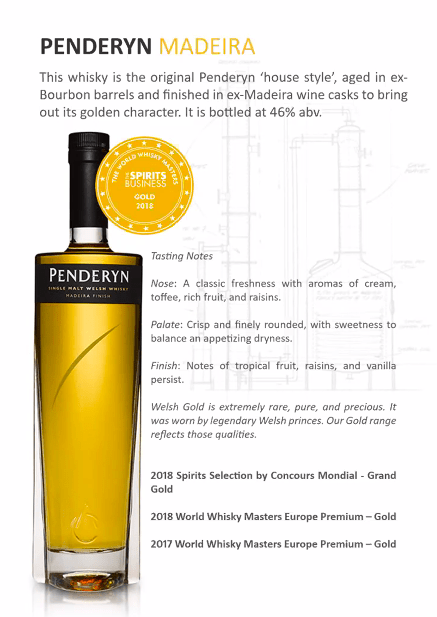 We then moved on to the Penderyn Sherrywood, a single malt whisky matured separately in ex-bourbon barrels and ex-Oloroso sherry casks, before being brought together and bottled. The ex-Oloroso sherry casks are Butts, larger in size than barrels (as per the visual below of different cask types). For Penderyn, these will need a longer maturation period than for the whisky being created in the first fill ex-bourbon barrels.

This process effectively gives a Penderyn enhanced by the sherry (rather than a full ‘Sherry Bomb’ for example, which would be expected for those whiskies matured solely in ex-Sherry casks).

The Penderyn Rich Oak was the most recent addition to the Gold range, previously being sold as a limited edition. It is aged in ex-bourbon casks and then finished in STR casks. STR stands for ‘scraped, toasted, re-charred’. The casks going through this STR process are ex-red wine burgundy casks.

The Penderyn Portwood is another ex-bourbon cask matured whisky which is then finished in casks previously used for Port, a Portuguese fortified wine. This would be a good whisky to match with cigars for example, and it was probably my favourite on the night.

Finally the most surprising whisky to most in the virtual whisky session was the Penderyn Peated. This was a whisky matured in ex-bourbon casks and finished in ex-Islay heavily peated quarter casks for 6-9 months. This gives it a light and sweet Penderyn with a subtle smoke. No peated malted barley was used in the process (as you would usually expect for peated whiskies) and this makes it a very approachable peated whisky.

All in all, the virtual whisky session run by Shona and Mike at Penderyn Distillery was great fun combining the right dose of knowledge being shared with equal amounts of whisky to enjoy. Diolch yn fawr nos dda! (Thank you very much in Welsh – at least that is what I hope it says).

Penderyn have announced that it was planning a new distillery at the historic Copperworks site in Swansea for 2022 and also work is underway for another distillery in Llandudno, North Wales to open in 2021. The plan is to produce Welsh peated whisky from peated malt at the new distillery.

These facilities will add to the huge numbers of visitors that Penderyn Distillery has drawn since the opening of its purpose-built visitor centre in June 2008. It is one of South Wales’ top attractions, visited by more than 35,000 people in 2016.

The second site will be in the Old Board School, latterly a council office, in Llandudno and it will be the Welsh Whisky Company’s first expansion from its site in Penderyn, in the Brecon Beacons.

For nearly two decades, Penderyn was flying the flag for Wales alone but in 2016 the Dà Mhìle Distillery in Ceredigion, near Llandysul, helped to make Wales an official whisky-making country, as according to EU alcohol regulations, a country has to have at least two distilleries making and marketing whisky to be recognised as a legitimate whisky industry.

Aber Falls Distillery was established in Gwynedd nearby to the Snowdonia National Park in 2017, with its whiskies to be released in 2021. In The Welsh Wind Distillery, also in Ceredigion, overlooking Cardigan Bay is another entrant into the growing Welsh Whisky category also developing a new whisky. The future certainly seems to be looking bright for Welsh Whisky. 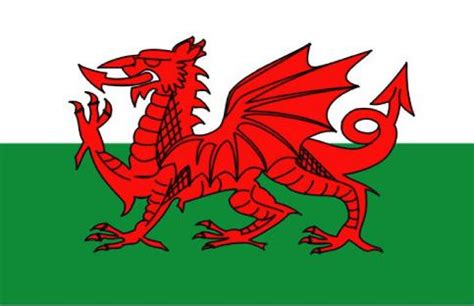 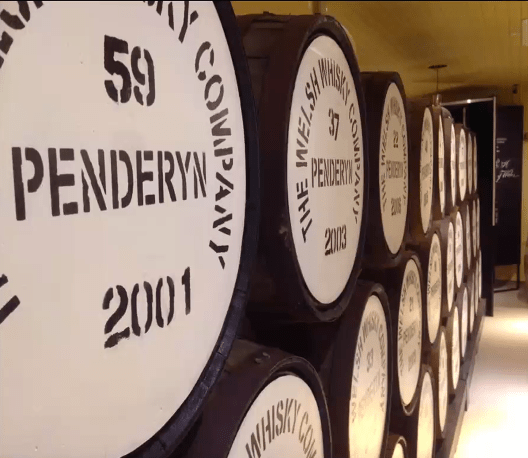 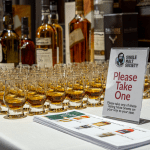 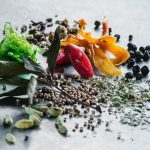