The Rise of Scottish Rum

The thriving Rum scene in Scotland continues to grow with many new distilleries and brands since the original launch of Dark Matter Scottish spiced rum in 2015. Scotland has a long association with the production of rum which dates back to the 17th century and the sugar boom.

The current Scottish rum scene will be showcased in the first ever Scottish Rum Festival due to take place on 25th July. For those interested to take part in this virtual event, for £34.95 you will receive: access to virtual rum sessions, 10x 30ml Scottish rums and a branded Glencairn tasting glass, plus you can also feel good about the charitable donation included in the cost of the ticket. 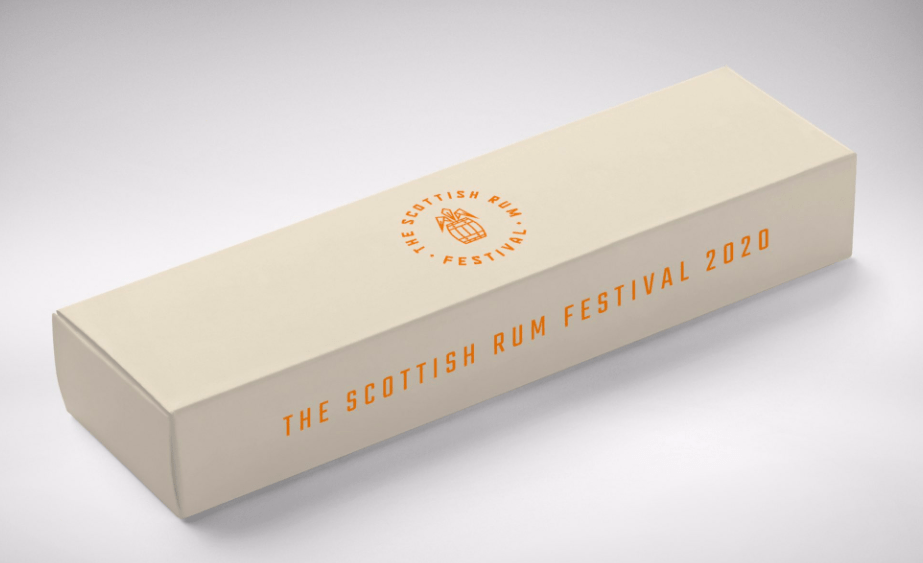 The festival programme is due to be announced soon and will be supported by spirits experts and educators such as Dave Broom and Peter Holland.

The WSTA’s Market Report states that sales of flavoured and spiced rum in the UK have increased from less than six million bottles in 2014 to more than 10m in 2019. It also shows that the wider rum category grew by 1% in the 12 months to June 2019, with UK consumers buying a total of 35m bottles of rum during the period, worth £1 billion.

For Scottish Rum, it all started back in 2015 when Scotland’s first rum distillery was launched: Dark Matter Distillers, based in Aberdeenshire. Since they released Dark Matter spiced rum, lots of rum distilleries and brands have been launched across Scotland and the festival will be celebrating these in July. 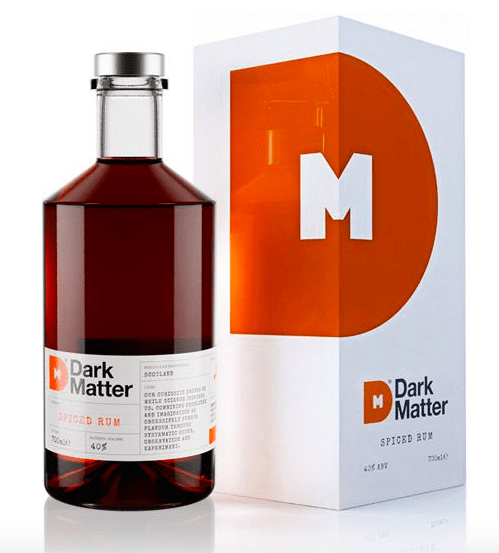 Jim Ewen, Managing Director of Dark Matter Distillers, was quoted on the Press and Journal newspaper as follows: “From a consumer/on-trade perspective there’s a huge amount of interest in rum and sales are increasing year on year. Far from being a barrier, locally-produced rum is hugely interesting to consumers.”

Glasgow’s first Rum Distillery in over 300 years was opened by Wester Spirit Co. The Wester premium spiced rum is “made the old fashioned way in the west end of Glasgow” and was started in 2018 by Zander Macgregor and Allan Nairn. Made in small batches using traditional ingredients and small pot stills.

“The quality of the rum being produced in Scotland is great and there are now a handful of dedicated rum distilleries producing quality spirit. The popularity of Scottish rum is growing as more people become aware of these producers.” Zander Macgregor 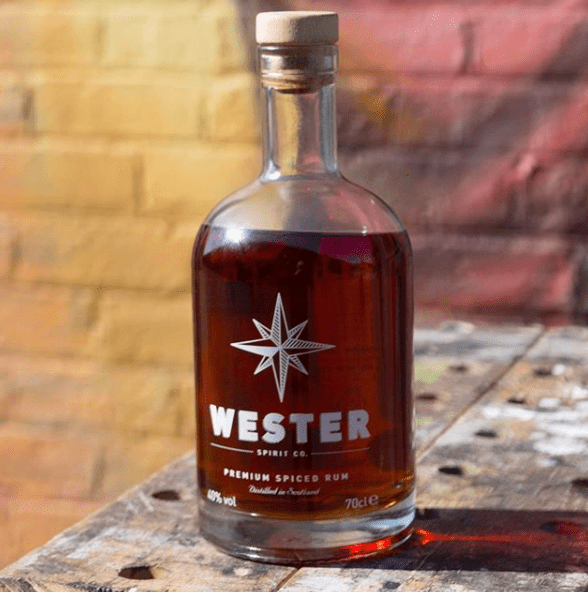 The Jacobite Spirits Company have released The 45 Scottish Spiced Rum – made with Scottish botanicals and international spices. The company was founded in 2019 by a group of friends united in a passion for craft drinks (and drinking).

The 45 is a golden, spiced rum, robust in flavour but also “over-proofed” with an ABV of 45%. The taste of The 45 combines ginger, vanilla, caramel, orange peel and liquorice (from a Scottish root botanical) with a light, background smokiness. This comes from Scottish smoked seaweed, which gives their rum a faint salinity.

This mix of flavours results in a classic “sweet and salty” taste (a version of salted caramel). The 45 is then aged in a bourbon/whisky cask, one that has been used for years in the US bourbon craft and subsequently more years in Scotch whisky distilling. This finish brings together the flavours of Scotland and the USA and in an unfiltered, real rum. 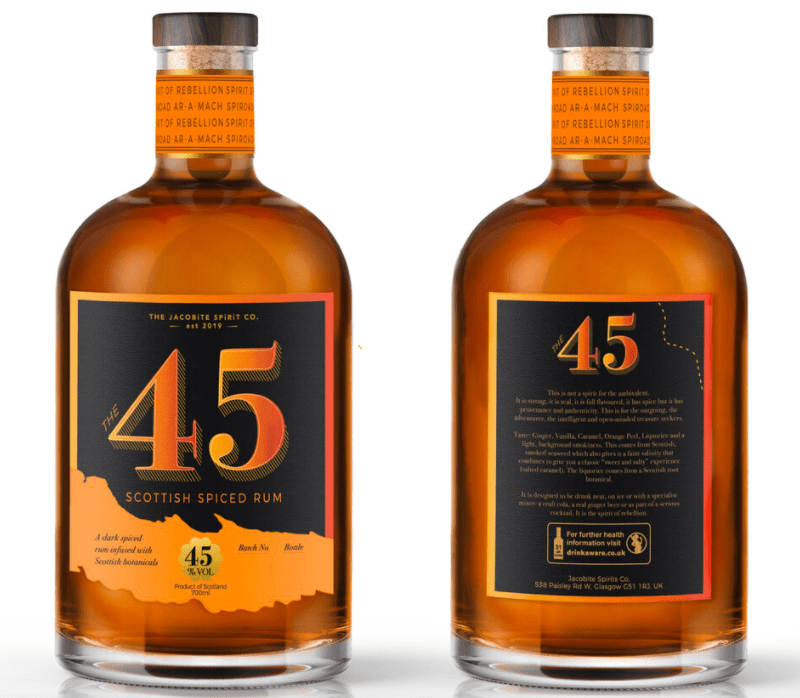 Another Scottish Spiced Rum comes courtesy of The Glasgow Distillery Co. They released the Banditti Club, apparently named after “a company of bold rogues who would meet in Glasgow’s local public houses; singing, eating and playing music late into the night”. Matured and spiced in Glasgow, Banditti Club is made using rum distilled from freshly pressed sugar cane juice on the Island of Madeira. Aged for up to 12 months in oak casks, the rum is spiced with a selection of fresh tropical fruit and exotic spices, including pineapple, orange, cacao and allspice. 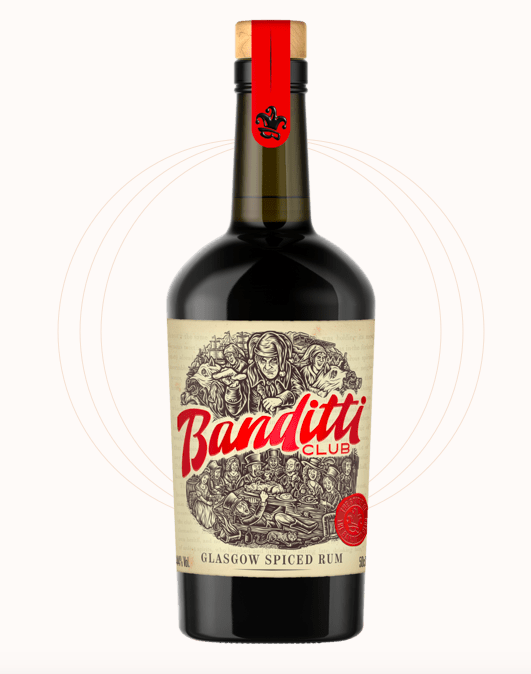 The mighty craft beer producers BrewDog have also entered into the distilling arena via the BrewDog Distilling Co. and new products such as their Five Hundred Cuts Botanical Rum. Made with blood orange, ginger and finished in sherry casks, their Distiller’s Cut is a sweet and spicy rum inspired by the darker side of the Five Hundred Cuts story. Interestingly, it is distilled in the world’s first triple-bubble still after five days of fermentation and is then double pot distilled to create a white rum which is then infused with a range of spices and ingredients to create the botanical expression. 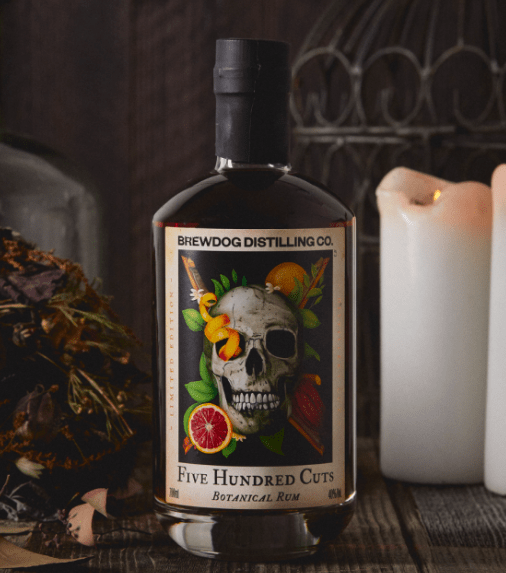 Mattuga Distillers were founded by husband and wife Paul and Jacine Rutasikwa. Their Mattuga rum has an east African flavour profile and uses a combination of sugar cane molasses and a blend of black tea, ginger, cloves, vanilla, cardamon and cinnamon.

“There is a curiosity about rum and a lot of diversity. The category is a lot of fun, so it catches the attention of the younger demographic. It’s a spirit that we think deserves a lot more respect.” Jacine Rutasikwa 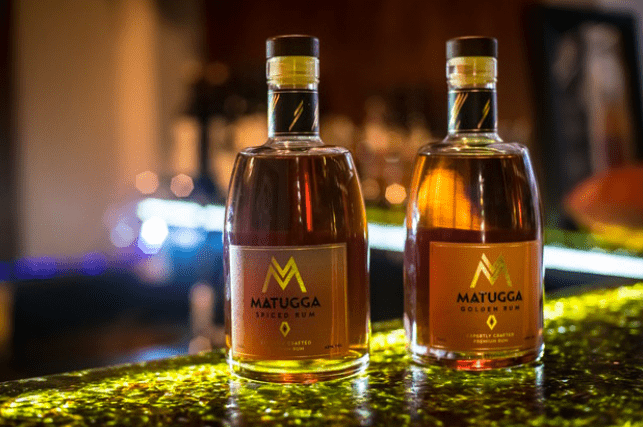 Launched in 2016, SeaWolf was the first white rum to be distilled in Scotland. The white rum brand came from the team behind renowned Edinburgh bar Bramble, Mike Aikman and Jason Scott, and Vino Wines’ co-founder, Gavin Ferguson, who have teamed up to create drinks innovation company, Boilermaker Drinks Co.

Made at Ogilvy Spirits, the fermentation of the cane molasses (the spirit’s base ingredient) is done at low temperature for four weeks using both rum and champagne yeast, which gives this drink its unusual flavour profile.

The SeaWolf brand takes its name from the Native American term for killer whales. This is also a nod to both Scotland’s naval links with rum importation and the pods of “sea wolves” that are found around Scotland’s coastline today. 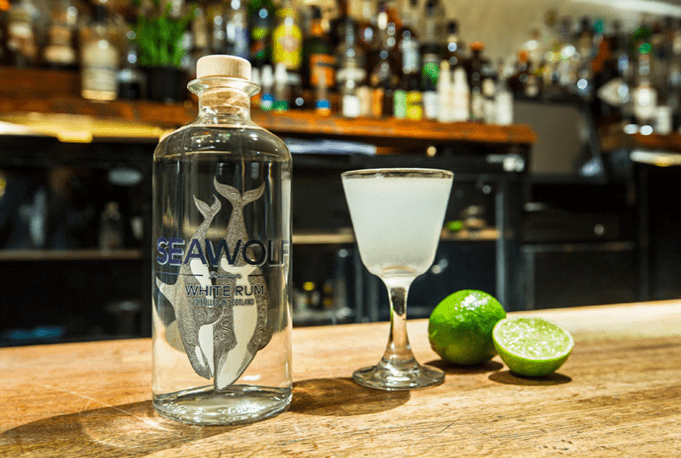 Collin van Schayk is the Director and Head Distiller at J Gow Rum and VS Distillers in Orkney, Scotland. Named after Orkneys very own 18th century pirate John Gow, J. Gow Rum Distillery sits metres away from the sea on Lamb Holm, a 0.15 square mile uninhabited island, making it (probably) the smallest rum producing island in the world. 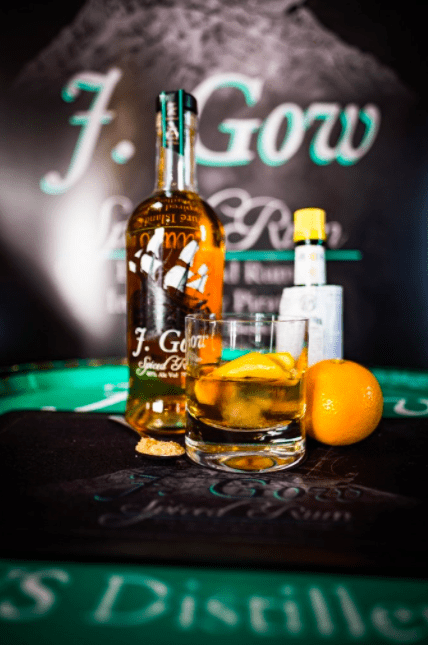 Ninefold Distillery is the south of Scotland’s first and only rum distillery, and the most southerly in Scotland. Rum is made from scratch here in small batches from molasses by owner and distiller, Dr. Kit Carruthers. North African molasses are fermented, double distilled, bottled and labelled on site in batches of no more than around 300 bottles, making Ninefold rum truly artisanal. 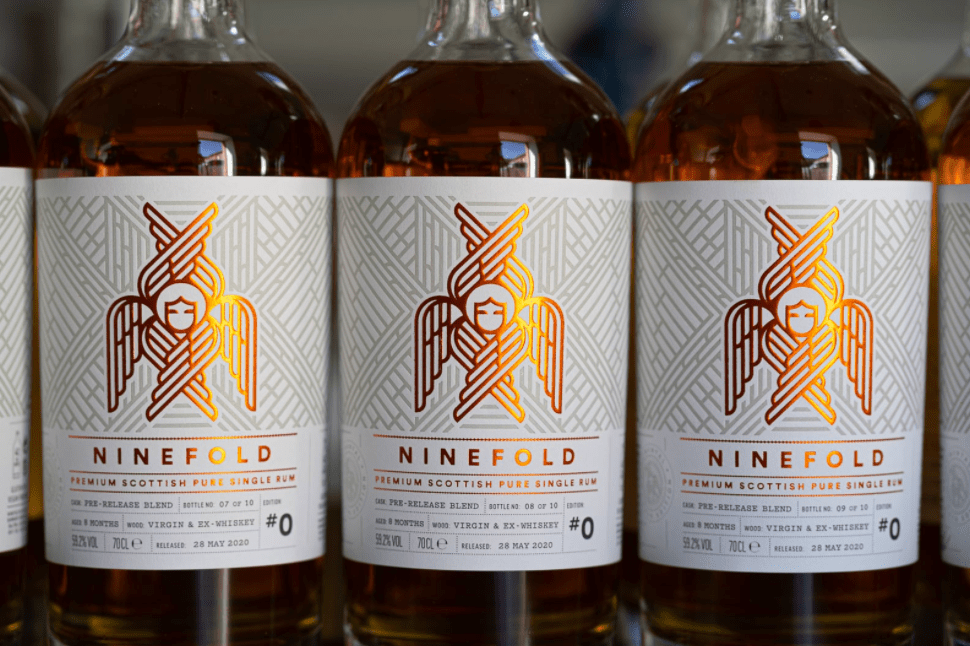 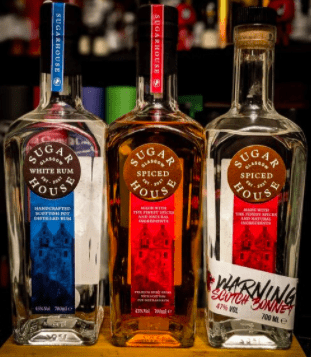 NB Distillery from North Berwick in Scotland, moved into the rum category back in 2017 with the launch of NB Full Bodied Rum and NB Light Fruity Rum. The whole process from the fermentation of the raw molasses, to the distillation in their bespoke Jamaican style copper double retort still, through to blending and bottling is carried out by the company. 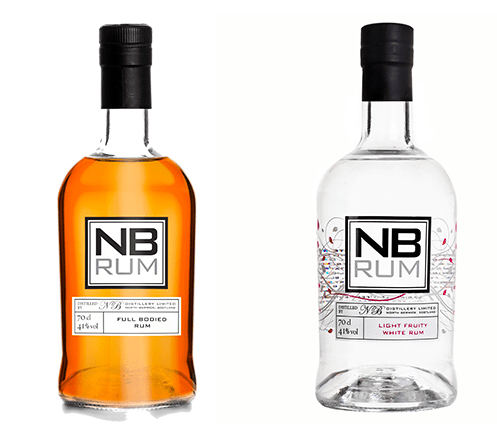 Devil’s Point small batch aged rum was created by the team at Deeside Distillery in Aberdeenshire. To create the rums, Deeside Distillery use higher temperatures to ferment the product in order to mimic the warmer climes paired with the use of dunder and dunder pits, a traditional flavour source used in the fermentation and distillation of the wash of Jamaican rum.

The distillery makes their rum from sugar cane molasses which are mixed with water, dunder (the leftover product in the still from a previous rum distillation which boasts sugar and flavour) and yeast, and is then fermented for around three weeks. The mixture is distilled twice with some additional dunder before reducing the ABV and putting into the casks.

They also keep the dunder from previous runs and use it to kickstart the next fermentation and also to add more ‘funky’ flavours to their white rum. 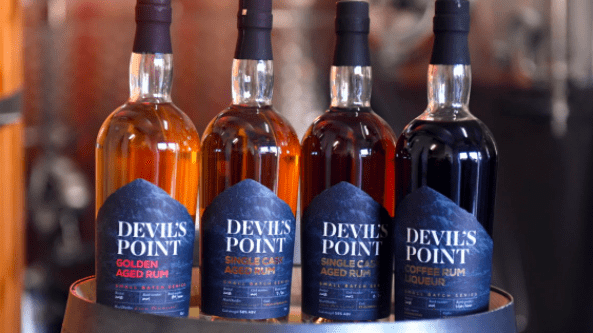 “Rum seemed the obvious next product for us after all the other spirits we have made and it now allows us to mature our Scotch in our own Rum casks and vice versa – but it needed its own identity”. Tony Reeman-Clark, Founder of Strathearn Distillery

The Golden Rum is described by Reeman-Clark as having an oaky-finish with a complex blend of sweet vanilla and spicy flavours, which gives way to burnt sugar and caramel. 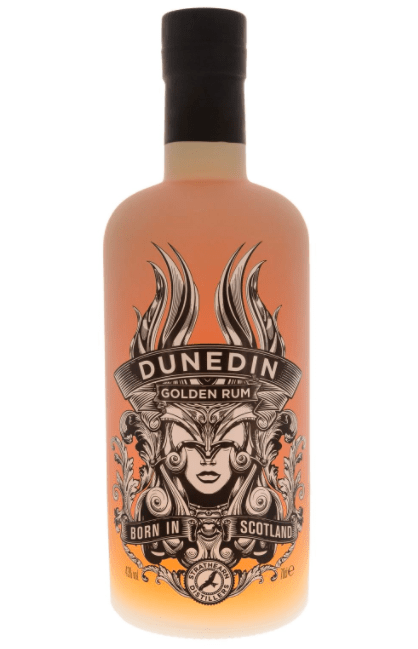 Garry and Shona Wilson are the people behind Rumburra Scotland Ltd in Fife and their small-batch golden aged rum brand Rumburra. This family business has been in operation since 2019 and their signature rum, Rumburra Orach, is a premium, craft, golden aged rum. It is small batched and handcrafted in Scotland at 42.3% abv. 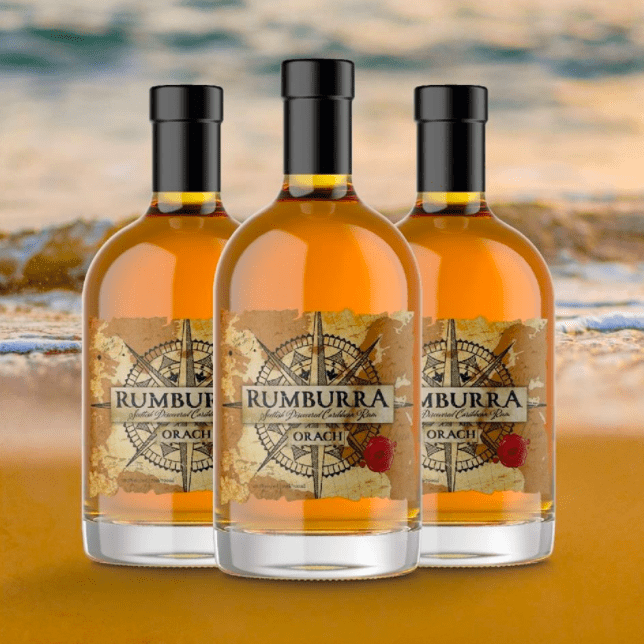 Spirit O’ Clyde has taken inspiration from the rich history of Clydebank to create the range of craft spirits. The Old Shipyard Spiced Rum takes its name from the iconic shipyards upon which Clydebank’s proud history was built. Launched in spring 2019, Spirit O’ Clyde celebrates the town of Clydebank on the River Clyde.

The rum is an infusion of herbs and spices including Scotch Bonnet peppers for a unique flavour and warming heat. Currently distilled in Angus before being bottled and labelled by hand by the Ross family. 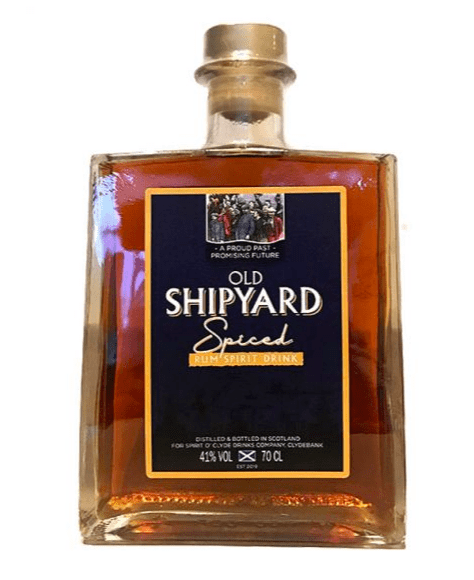 Gleann Mór Spirits Co. Ltd launched Edinburgh Rum back in 2019, bringing a taste of the Caribbean to Scotland’s capital. Edinburgh’s historic shores are no strangers to the exotic, with plenty of delicious cargoes welcomed across its cobbles.

Today, they are proud to continue that centuries-old tradition, bringing a taste of the Caribbean to this famous city, courtesy of their sublimely smooth and softly spiced rum. A harmonious fusion of far-off spices and homegrown endeavour, each gloriously golden drop is expertly blended and bottled right here in Scotland’s capital. 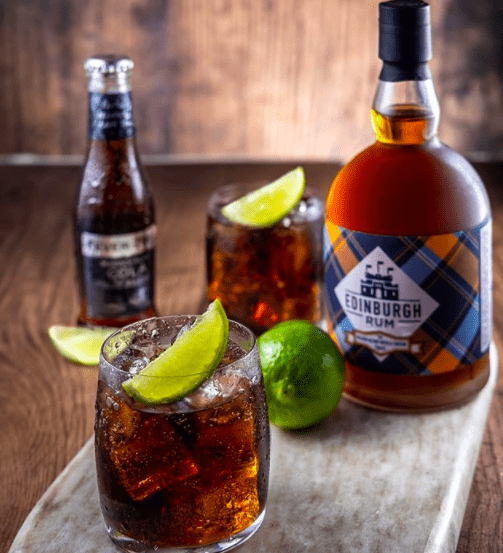 Aberdeen’s Fierce Spirits (and Brewery) has produced a Coffee & Vanilla Rum. The 42% ABV spirit is a unique blend of cold brew coffee and vanilla and was first launched in 2019. 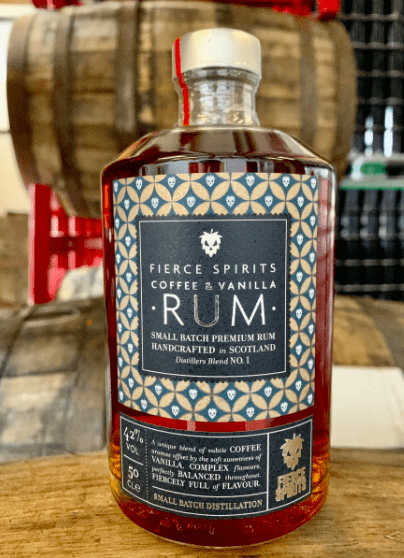 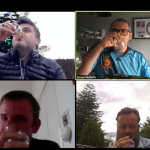 Having fun with The Dram Team subscription boxes 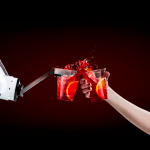 Looking forward to trying this 18yo Bains single g

Decided to buy this new Ajax top that seems inspir

Finally!! Getting the vaccine next weekend 💉

Great to see those junipers growing out in the fie

Edinburgh zoo this afternoon....nice to be out and

Tasting with Brazilian friends due to start soon..