Here is a selection of some of the best drinks-based releases on 1st April 2020….something to laugh at during our period of self-isolation.

Pictured above is Douglas Laing & Co‘s Big Peat’s new Limited Edition, “Big Beat”, music-aged by playing music within his warehouse, proudly offered at a noisy 48% ABV and entailing a high frequency of smoke alongside dark chocolate and sea salt.

“Having carried out extensive experiments by which music is played within our warehouses, we have seen a direct correlation in the amount of flavour and character picked up by the spirit.” Fred Laing, Chairman at Douglas Laing and creator of Big Peat

Finish: “He” hits the high note with a long finish of streaky bacon, toasted marshmallows and charred oak

WaterProof whisky claimed to have purchased a disused oil rig in the North Sea to build the world’s first duty free distillery.

The GlenAllachie new release is a Single Malt scotch whisky with a gherkin wood finish, you can even see the impact of this unusual combination on the colour of the liquid…

Another example comes courtesy of The Grapevine, a new Scotch whisky release made from potatoes and ginger called The Glenpass.

The pranks are not exclusive to whisky and Pinkster Gin has joined in on the act with the release of the very limited The Pinkster G&T Pot retailing at £1,500 (supposedly).

“We stand by the mantra that no matter what is happening in your life, you always offer tea. Admittedly, with a £1,500 price tag, this limited release beauty is firmly at the collector’s end of the market.” Will Holt, Pinkster Gin Director

Shortcross Gin from Northern Ireland has released some true innovation in the gin category with gin infused dissolvable capsules.

Following along similar lines, Borough Wines have introduced the Vinocapsule, the self-acclaimed easiest and most delicious way to drink wine in the 21st century.

Shoe brand Volley Australia claimed it was launching a sneaker in collaboration with iconic VB (Victoria Bitter), however when clicking on the link the page revealed the truth behind the prank…

“If you made it this far and are still asking yourself where can you quench your thirst on one of the most Aussie collabs ever… we’re sorry to say but this is another one of those April Fool’s jokes. Sorry Australia.”

BWS shop has released a product exclusively for our canine companions, ‘Woofreshing Ale’.

Some examples may not have come from the brand owners themselves and could be from a different year altogether, but I will include them below anyway….

The Single Malt Strips from Glenlivet, Laphroaig and Lagavulin. 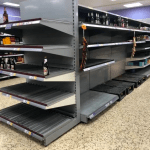 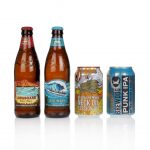