He is the British aviation entrepreneur who revolutionised the industry by starting the first ever Low Cost Carrier (LCC) no-frills trans-atlantic airline in 1977, with flights from London Gatwick to New York JFK service by Laker Skytrain airlines. 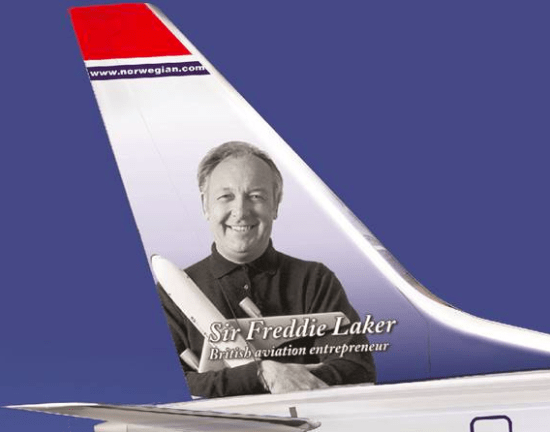 It is perhaps appropriate that Sir Freddie is recognised on the tailfin of a transatlantic Norwegian airlines Boeing by their CEO Bjorn Kjos, given that he helped to re-write the rules of international civil aviation and inspire a new generation of aviation entrepreneurs behind airlines such as Norwegian, EasyJet and Virgin Atlantic.

His idea for Laker Skytrain airlines was simple: to create an airline that runs like a train.

“This is geared, and built, for the instant traveller, we’ve got 345 empty seats every day.” promised Freddie Laker at London Gatwick airport at the launch 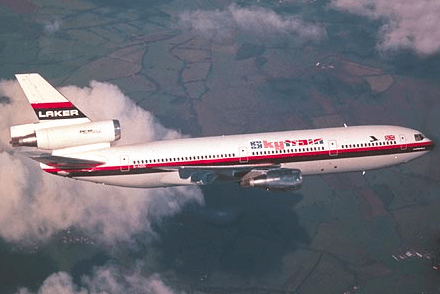 Sir Freddie used DC-10 airplanes and used a smaller, more remote airport in London Gatwick, which at the time was not as developed and connected as it is today. It took him 5 years of a legal battle with IATA and the British Government to obtain the transatlantic license he required. However, there were conditions made and one such condition was that he was not allowed to sell seats on ‘scheduled’ flights and also had to sell tickets within 12 hours from departure. This was the reason for the airline to be run more like a train.

He opened up the skies with his first flight on 26th September 1977 and made air travel accessible to the masses by charging a quarter of the usual ticket prices at the time. Typically in 1977, a return ticket to New York with Pan Am or British Airways would cost around £750. Laker Skytrain proved to be a huge success with support from the public, high demand for tickets and people queuing to, in quite a few cases, fly for the first time on an airplane (picture below). 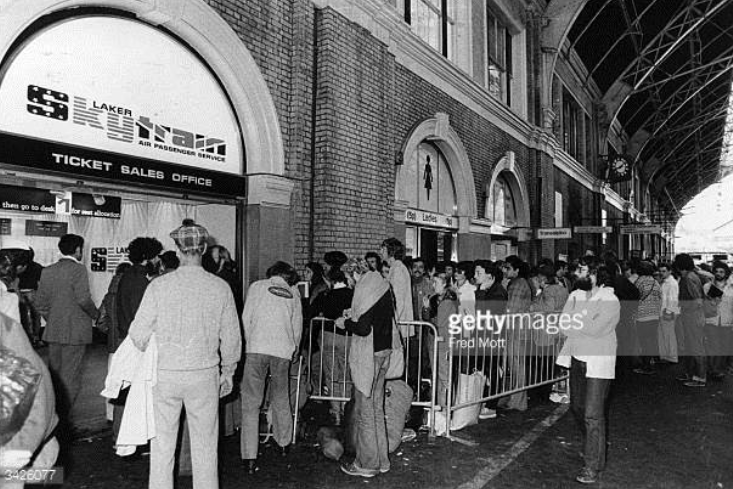 Sir Freddie was a unique showman that helped to create publicity in the front pages and build the profile for his business, before Richard Branson (pictured with Freddie below) and others were known to do so within the aviation industry. He even managed to deliver a profit in the 1st year of trading for Laker Skytrain despite all the challenges faced from competition. 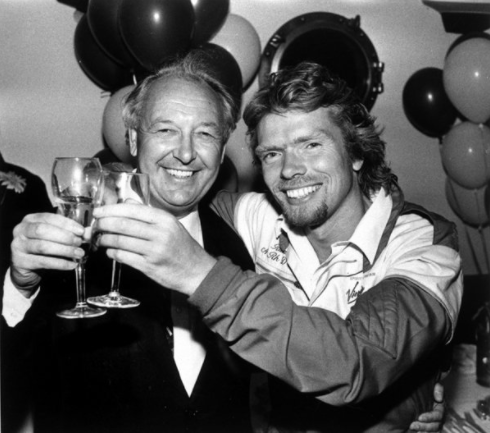 “I looked up to Sir Freddie Laker, the pioneer of cheap air travel who was driven out of business by British Airways. It was he who told me to “Sue the bastards!” when BA tried to do the same to us. We took his advice and succeeded. He also suggested I use myself to put Virgin on the map, which led to ballooning and boating adventures.” Richard Branson

He soon decided to expand further from the London to New York route, with flights initially to Florida and California in the USA and beyond, with global ambitions for his no-frills airline.

However, despite his focus on cost management by limiting aircraft baggage weight to 18kg and introducing a reduced thrust take-of method for example, his real problem was the competitive forces and pressure put on his routes by other airlines. These rival transatlantic airlines were accused of collusion by Sir Freddie and ultimately settled a lawsuit out of court, but only three years after the collapse of his airline.

His argument was that there had been a campaign to discredit his airline and put him out of business through cutting airfares only on competing routes, with competitor fares only slightly more expensive but offering inflight meals and other benefits, and misinformation on the press about the financial status of his company. 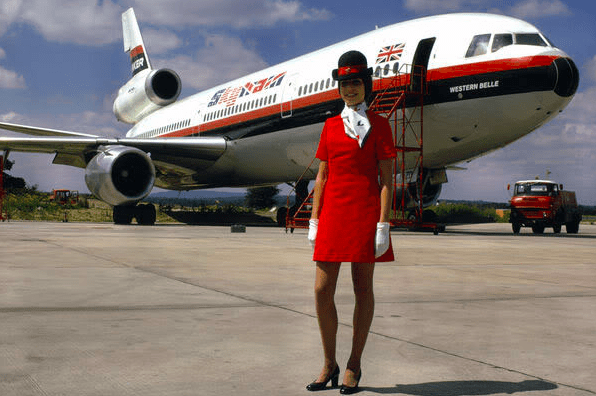 The airplanes used by Laker Skytrain, the DC-10, were also temporarily grounded in the summer of 1979 because of safety fears after a series of crashes. The grounding cost Laker millions in lost revenue, higher costs for chartering in aircraft and some public confidence in the DC-10 fleet. Laker’s rivals such British Airways, mostly flew across the Atlantic with Boeing 747 Jumbo jets.

These factors, combined with the airline’s rapid expansion, rising oil prices and a worsening currency exchange conditions, led to a collapse. The crisis came to a head in February 1982, when his bankers called in their loans, but he was unable to raise the funds and the banks appointed a receiver for Laker Skytrain. The airline collapsed early on the morning of 5 February 1982 with debts totalling £270 million.

Sir Freddie passed away in 2006 and he left a legacy to his aviation successors, such as Richard Branson at Virgin Atlantic, who learnt from his mistakes to succeed in the face of strong adversity and competition from established legacy airlines against the LCC airline upstarts.

Over the last 12 years since he passed away, Sir Freddie Laker’s son has digitized almost 10,000 photos, newspapers, and letters that he left for him. In an effort to preserve and share them, these documents have been donated to a non-profit historical society that maintains the website SirFreddieLaker.com where all of them can be found. It’s been a true labor of love and we’d encourage if interested to visit his website.

For reference – BBC Article on Norwegian airline: The low-cost airline changing the way we fly

For reference – Destroying the Godfather of the Modern Airline Industry 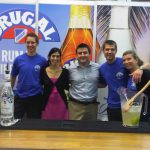 A Walk Down Memory Lane…RumFest 2011 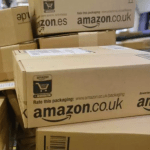 The Amazon History of Me